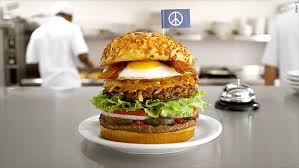 After last weeks debacle between fast food giants McDonald’s and Burger King, Denny’s has stepped in to make an offer on the “peace burger.”

Burger King reached out to their longtime rival, McDonald’s,  in a full page ad on Wednesday, August 26, New York Times Paper for a ceasefire. The “Open Letter” asked McDonald’s to pause the so called burger wars for one day to create the ultimate burger mash up. Combining both companies signature burgers, the McWhopper would aim to raise awareness and funds for Peace Day.

Peace Day is a global effort supported by the Peace One Day Foundation. On September 21, Peace One Day promotes a day of global ceasefire and non-violence. In order to raise awareness and support, operators raise funds for the non-profit foundations international work. Donations help provide educational supplies to 131 countries worldwide.

Burger King offered to partner with the quick service chain to create the McWhopper, which would be sold at a pop-up location in between both companies headquarters. All proceeds would be given to the Peace One Day Foundations cause.

Amidst the recent rejection, Denny’s has stepped in to extend Burger King its own peace offer.

Adhering to similar methods of outreach, Denny’s released its own full page ads in USA Today and the New York Times.

“Hey @BurgerKibg, we love the idea of a peace burger. we’re just not sure what to call this thing. Any ideas?” asked the fast casual chain in its full page ad.

Burger King has not offered a response to the fast casual chains offer nor has Denny’s specified any details to where the burger would be sold.

Denny’s is not the only chain trying to place a bid. Krystal also announced it would like to combine their square burgers with the whopper to create a ‘peace burger’.