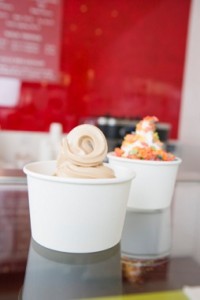 Many businesspeople today are considering frozen yogurt franchising, and it can be helpful for them to read the story of how someone else found success in that arena.

Brian Trager, for example, spent 20 years as an international businessman, a producer-exporter in Costa Rica, consulting in Vietnam and working in New York City startups before getting into frozen yogurt franchising.

Brian Trager wanted to get into franchising with an established brand, and in 2012 he opened his first Menchie’s Frozen Yogurt store. Today, Trager has four Menchie’s locations plus a mobile Menchie’s, and has another shop on the way.

Given the strong presence Sintel Systems has in the frozen yogurt segment of the restaurant point of sale marketplace, we share articles and commentary about the perceptions and reality of the risks and rewards involved in making the franchise career change.

Here are the highlights of an Entrepreneur.com interview with Trager, “Franchise Players: From International Entrepreneur to Fro-Yo Franchise”:

• Trager chose franchising to make a good investment return with reduced risk. “I wanted to be part of a leading brand in a category from day one,” he tells Entreprenuer.com.

• Trager owned and operated a waterski school during summers while in college. After graduating he managed a retail food store where he also gained experience in the wholesale and importing business. In Costa Rica he worked as a producer-exporter.

• Back in the states, Trager joined former university colleagues from Carnegie Mellon at Sitebridge, a Manhattan-based software startup which focused on web-based remote meeting software. After that stint, he was the first employee at Snapfish, where he set up the company’s initial business infrastructure.

• Post-Snapfish, Trager started an automotive aftermarket business that he sold to his business partner five years later. After a brief stint in the solar space he worked in Vietnam as a buying consultant. After traveling the world for 20 years, he purchased his first Menchie’s.

• Trager says he chose Menchie’s because its management team is, to their core, devoted to being No. 1. “In selecting a franchise I chose the people who I wanted to be doing business with just as much as I scrutinized COGS, labor, sales, and expenses,” he tells Entreprenuer.com. “I believed that the management team would stay the course. A franchise is not a two-year investment. Menchie’s provides a strong business model.”

• Trager says he also chose Menchie’s due to its overall branding, theme, and values that are woven through the organization. “I tasted the product and experienced the service in-store. Menchie’s has a superior quality product and a gold standard guest service model. The Menchie’s franchisor also had/has not diluted and leveraged its balance sheet. Menchie’s was and is fiscally sound.”

• Trager spent about $330,000 to open his first store. Construction costs were roughly half that amount. “Yogurt machines are a large piece of the build-out cost,” he adds.

• Trager visited with other Menchie’s store owners and operators who became a great resource to validate his questions.

• Trager says that time management leading up to his first opening was his biggest challenge:

– “While finishing construction and making sure the store is set up perfectly, you need to educate your team and let the community know you are coming.”

– “I wanted to both market full-time and educate full-time right before the opening. With that said, I suggest investing in your core team and marketing well before opening so both you and your entire team at the opening are focused on making your guests smile.”

– “Don’t try to do everything yourself. Delegating is OK. You want to be a great host at your opening.”

• Other Trager quotes from the Entrepreneur.com interview include:

– “Choose a franchise that has a proven track record and a strong brand.”

– “Make sure you like who you will be working with. Is the franchisor effective and benevolent?”

– “Sell something that you enjoy and feel good about. Do you feel good serving the product to your children?”

– “Pick the best real estate, market the heck out of your grand opening, and if possible be first to market.”

– “Most everything that boosts top line sales will boost your profit and improve ROI.”

For more insights into career changes and fro yo franchising, check out our related posts, As Second Career Franchisers, Baby Boomers Are In The Zone, Frozen Yogurt Is Hot, Hot, Hot, and Unbroken: Entrepreneurs Fixed On The Promise Of Fro Yo Franchising.

Before you make your franchise move, consider calling Sintel Systems for a free phone consultation to help weigh and understand your point of sale (POS) options.