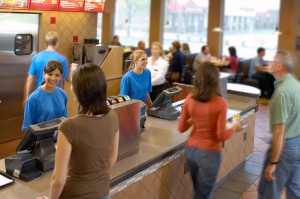 Over the past decade restaurants like Starbucks, Chili’s, Dominoes, and Taco Bell have made it their mission statement to provide “superior order[ing] experiences.” Nation’s restaurant news discusses these leading innovative companies as they paved the way for the rest of the restaurant industry.

Boasting nearly 12 million active users in the US and Canada, the coffee shop empire is notorious for My Starbucks Rewards. Contemporary method of business has been their staple of success. Incorporating loyalty programs and mobile payment features has secured a loyal following of customers.

Garnering 22,088 stores internationally, with approximately 11,962 in the States and 1,330 in Canada, Starbucks is the leading coffeehouse retailer.

As of September 2009, Starbucks launched their first mobile loyalty app and introduced mobile payment in 16 Seattle and California locations.

By 2010 the mobile payment tests had expanded to 300 stores in New York City and Long Island.

The following year Starbucks expanded mobile payment for androids to the international market.

Apple users received a redesigned version of the in March of 2014, followed by android in September featuring “shake-to-pay” and mobile tipping. By the end of the year tests for mobile ordering and payment in Portland began, which is expected to roll out nationally by the end of 2015.

Starbucks intends to move in the direction of target loyalty programs. In the long run they want to send more offers to the right people at the right time.

Domino’s laid the groundwork and continues to revolutionize online ordering. Since its launch in 2007, the QSR pizzeria has maintain dominance over the market.

Heavily centered on its technology offerings, the tech portion of their main offices in Ann Arbor, Michigan are expanding rapidly. Customers who order online tend to purchase more than other means of ordering, which supports the rapid expansion of the department.

Online purchases amount to half of all purchases in the US and forty percent internationally. In affect Domino’s has witnessed higher satisfaction rates and frequency of purchases.

Long before the 2007 launch of mobile ordering Domino’s had launched their first ever website, which brought record sales to there 1,000 stores.

The ensuing year Domino’s launched Pizza Builder and Domino’s Tracker that became symbol of their online ordering. Domino’s Tracker allows a connection between you and your food, from the time you place the order until it arrives to your door. Customers are able to track their food in the oven to when the delivery man has left his store.

By 2012, its technology was able to be used by eighty percent of smart phone users, including Apple and Android.

A pilot program in 2013, unsuccessful, attempted to let customers see their order being made through a webcam. Although, the same year Domino’s revamped tracking features and aggregated pizza profiles.

In the last two years, tabletop tablets have become a component of many casual dining restaurant. Most notably Chili’s Bar & Grill who launched the use of tablets in 2013.

Customers have to freedom to order or pay with out the need for staff, thus creating a less dependable environment.

September of 2013 Chili’s announced its partnership with Ziosk, employing tablets to all company owned stores.

From April-August 2014 the restaurant chain conducted a five month long test of the Ziosk Tablets and after consideration decided to make the next move. By December Chili’s has completed the tabletop tablet roll out to franchised and company owned stores. Approximately 45,000 tablets are in use today.

In March of this year Chili’s introduced My Chili’s Rewards Loyalty Program in conjunction with AMEX Rewards.

Targeting younger generations who relied on their smartphones, Taco Bell was able to take the lead in mobile ordering.

Development began early in 2011 but began testing in five locations during 2013. At that time the application has mobile ordering and order customization.

By 2014, Taco Bell has launched the app system wide.

The taco corporation sees “mobile as a platform on which to build,” hence the future will accommodate tablet and other tech platforms.