Skip to content
Home » Blog » Uncategorized » Unfortunately, Your Merchandise is Flying Off the Shelf 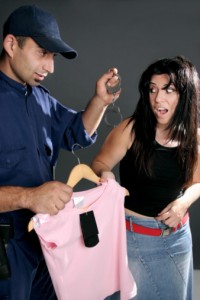 For this blog post, we flip things around and give you the bad news first, followed by some good news about how a robust POS systems from Sintel can be your greatest ally in coming to grips with inventory shrinkage.

J.C. Penney CEO Mike Ullman, in a recent conference call with financial analysts said, “Although the business has turned a corner, employee theft and shoplifting are a problem.”

In “8 Products Shoplifters Love to Steal,” a recent post at finance.yahoo.com, Ullman said, “This cannot continue. We are putting processes and disciplines back in place to control inventory shortage in our stores.”

J.C. Penney isn’t the only retailer reeling from shrinkage, the umbrella term for inventory missing-in-action due to clerical error, damage, employee theft and shoplifting.

The salient points made in the finance.yahoo.com post include the following:

– The National Association for Shoplifting Prevention (NASP) estimates that $13 billion worth of goods are stolen from U.S. stores annually.

– NASP calculates that shoplifters are caught once for every 48 times they shoplift, and that a shoplifter who’s caught has already stolen an average of $1,800 worth of goods.

The finance.yahoo.com post included some of the findings of the 25th Annual Retail Theft Survey conducted by Jack L. Hayes International, a loss-prevention consulting firm:

– There are approximately 27 million shoplifters in the U.S., roughly 1 in 11 people, who steal more than $35 million in goods from stores every day.

– Often, organized criminals hit stores in groups, carrying “booster bags,” shopping bags that look like they’re made out of paper but are lined with aluminum foil which allows products with electronic surveillance tags to be quietly taken through the exit without setting off the store’s alarm system.

“Theft can be a way of compensating for emotional distress,” says Rachel Shteir, quoted in the post and author of “A Cultural History of Shoplifting. ” Shteir adds, “Whether they were amateurs or professionals, a common thread among shoplifters is the idea of revenge.” Yahoo’s post notes that hair-growth formula like Rogaine, teeth-whitening strips, makeup, and facial creams are some of the preferred pilfered items. “Some people feel resentful that they have to pay a high price for them,” says Shteir. “They feel like they have already paid a high price for having genes that make them look the way they do.”

The post notes that pregnancy tests are also among the items most commonly targeted by thieves — particularly organized-crime networks — according to the National Retail Federation’s 2013 Organized Retail Crime Survey, primarily due to being easy to sell online. Don’t imagine it’s younger shoppers stealing these items because they’re too embarrassed at the register. Barbara Staib, spokeswoman for NASP, tells finance.yahoo.com that 75% of all shoplifters are adults. Younger shoppers might steal a pregnancy test because they’re too embarrassed to take them to the register, but adult shoplifters account for much more of the problem. After all, some 75% of shoplifters are adults, says Staib.

As with pregnancy tests, baby formula has a worldwide audience; the powdered variety is light, has a low shipping cost and can be sold online.

Both the National Retail Federation and the research firm Euromonitor International’s Global Retail Theft Barometer name men’s razors among the most popular stolen items. There’s a healthy black market for the small, desirable and over-priced cartridges such as Gillette’s Mach3 12-pack.

Watches, bracelets and earrings may be worn by shoplifters as they walk out of the store in full view of staff and security cameras. Gold and silver jewelry is easily resold or melted down and often impossible to trace.

Fitting rooms are a perfect fit for shoplifters. Kathy Rodkey, author of “The Customer Isn’t Always Right,” tells finance.yahoo.com, “There is no security company in the world that can put a camera in a fitting room, so it’s almost impossible to catch underwear shoplifters.” They can shop for a whole new wardrobe, leaving their old clothes behind. Or, says Rodkey, “Shoplifters will put three or four bras on them, three bathing suits, four or five pairs of underwear and then put their regular clothes on over them.”

Their small size and relatively high price are tempting to shoplifters, thus many drug stores today lock up condoms in glass cabinets to prevent theft. “It’s a dilemma for retailers,” says Richard C. Hollinger, professor and chair at the department of sociology, criminology & law at the University of Florida in Gainesville. “If they’re in a cabinet, they won’t sell as many.”

Apple’s iPhone accessories such as chargers, cases and headphones are thieves’ new high-tech target. “Most electronic accessories are not wired or nailed to the counter like smartphones, tablets or computers,” Shteir tells finance.yahoo.com. Her research indicates that around the holidays, shoplifters steal for friends and family. Shteir adds, “Wages are flat and many middle class people can no longer afford the luxury items they like.”

The good news is that the cure for inventory shrinkage is information technology. In an article posted on their website, “Information Systems To Prevent Inventory Shrinkage,” the Houston Chronicle (HC) stated that, with the right systems to control inventory in place, “the money you save can raise profits without raising sales.”

Here are the three information technologies highlighted in the HC article:

• POS, Front to Back

By tying every sale to inventory counts and costs, a point of sale system can pinpoint internal shrinkage, thus calling for heightened back-room security measures.

For each product you sell, view the IT system profit margin reports by category and investigate any areas with reduced margins. HC writes, “If one area has a reduced margin, you need to investigate what is going on in the warehouse. You could have a reduced margin because you are buying more inventory than you are selling.”

HC recommends using an IT system to record “actual products ordered and received from vendors,” and not to use vendors’ packing slips “because packaging errors occur.” Instead, they write, “Run your actual inventory numbers against vendor claims once a month, and you can identify areas where you are paying for inventory you never received.”

Sintel Systems forms lasting partnerships with our clients that you simply can’t get from a reseller, allowing larger franchises to grow and providing start-ups the foundation for future growth from the very beginning. Our expertise can help you avoid common pitfalls of entry into this thriving but complex industry — including the rapid pace of technological change.