Skip to content
Home » Blog » Uncategorized » Will CurrentC Make It Alone? Don’t Bank On It 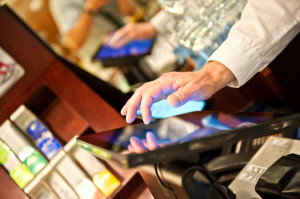 As consumers are poised at the advent of the holiday season, the recent security lapses at the retail point of sale continue to reverberate, and according to Wayne Rash writing for tech observer eWeek.com, it isn’t looking great for brick-and-mortar retailers.

Buyers continued to be worried about credit card security breaches to the point that Target revenue dropped dramatically after its data breach of late 2013. “Many of the biggest are so worried about sales that they’ve launched Black Friday, the traditional start of holiday gift buying, a month early—on Halloween,” Rash writes, adding that initial retail market analysts reports that saw rosy sales predictions were probably wrong.

Rash writes that, in the meantime, online retailers are prospering to the point that organizations with both, including Walmart, are slowing the expansion of their big-box brick-and-mortar stores to focus on selling online.

Rash writes, “You’d think that when faced with this kind of gloomy holiday outlook, merchants would do whatever they could to bolster in-store sales.” And, he adds, “You’d be wrong.”

Rash points out that two major drug chains, CVS and Rite Aid, are turning away shoppers who wanted to use Apple Pay, Google Wallet and touchless credit cards. “The reason was to preserve loyalty to CurrentC, an alternate payment system spearheaded by Walmart,” Rash writes.

As the only full-service point of sale provider — from software development to franchise incubator to ongoing support — part of Sintel’s commitment to our customers and business community is to share relevant ideas, information and industry news.

Rash believes that CurrentC isn’t necessarily doomed despite predictions, but a great deal must be changed for the payment system to survive in today’s retailing world.

Rash believes the problem is that CurrentC isn’t widely available yet and despite three years of effort, it won’t be available until sometime in 2015. “So why turn away shoppers now? That’s an interesting question,” he writes.

Here are the highlights of Rash’s eWeek.com post, “CurrentC Must Coexist With Apple Play to Survive in Retail World”:

• Rash says that, for Walmart, CurrentC is an effort to reduce the percentage of sales charged for credit card processing, which amounts to 2 to 3 percent of any credit card transaction. But to him, it makes much less sense for others.

• As currently envisioned, CurrentC depends upon customers using their bank-issued debit cards and the Automated Clearing House (ACH) network. Although ACH payments are fast, inexpensive and reliable, they offer no protections against fraud and they have no specific legal protections of the kind that credit card networks have. “In other words, there’s nothing protecting a customer against someone taking money from their bank account if it’s an ACH transfer,” Rash writes. “But it’s very low cost.”

• Surprisingly, ACH payments (and debit card payments) are cheaper than accepting cash because it has its own security problems (theft and forgery), no protections, is labor intensive, and expensive to accept.

• Rash notes that these days, customers don’t necessarily want to pay with cash if they have a choice. Cash is insecure, easy to lose, easy to steal and, because it’s hard to trace, it’s a tempting target for criminals. “For major purchases such as new televisions or even cell phones, cash is problematic,” Rash writes. “So in these areas, credit cards rule.”

• For consumers, the problem with credit cards is that they’re slow because you have to sign for the goods you buy and merchants want to speed up the payment process. Enter Apple Pay. Using Apple Pay is very fast, very easy and requires nothing more than your fingerprint. Perfect, if you want to get fast food, that is, IF you’re an iPhone 6 or 6 Plus.

• On the other hand, CurrentC will work with nearly any smartphone, regardless of whether it supports Near Field Communications (NFC) or not.

• CurrentC is not yet available and, as it’s currently envisioned it will only work with debit cards and store credit cards.

• Rash sees the cart/horse conundrum. The way the CurrentC plan works, you can either accept CurrentC or you can accept Apple Pay, but not both. Accepting only CurrentC equates to not accepting anything, since it doesn’t actually work yet. “This puts merchants in the position of either turning away business or abandoning CurrentC,” Rash writes. “Since these merchants have spent a lot of time and money while CurrentC has languished, it’s understandable why they want it to succeed.”

• Things may be changing, however. In a press conference, Dekker Davison, the CEO of MCX, the merchant consortium that created CurrentC, said that despite contractual language saying otherwise, the consortium wouldn’t prevent members from accepting Apple Pay. The news prompted Meijer, a Midwest grocery/retail chain, to decide not to shut down its NFC terminals and to continue accepting Apple Pay, Google Wallet and other forms of contactless payment.

• Rash believes that the delays that have impacted CurrentC, along with rapid developments in retail payment technology, have forced MCX into a position of having to give in to reality. “If CurrentC is to survive, it must offer customers something of value so they want to use it,” Rash writes. “That ‘something of value’ could very well be ease of use, support for nearly any phone and broad acceptance, coupled with the ability to embed loyalty cards.”

• Rash says the time for MCX to try and enforce exclusivity has passed. “Now, the MCX’s best chance for making it in the market is by being a better solution for most people,” he writes. “But aren’t those the very factors that retailers depend on to stay in business?”

For more insights into point of sale security, check out our related posts, Safer Consumer Transactions May Be In The Cards, EMV Technology Chips Away at Credit Card Fraud, MasterCard Mandates Contactless Payments At Point Of Sale, Near Field Communications And Tokenization Behind Apple’s Point of Sale Play, Email Addresses Purloined In CurrentC Breach, and Retail Accepts Its Mission mPOS-able.

Just as Sintel shares our vast point of sale experience and expertise with startup owners in order to help them make the best decisions from the very beginning, we are happy to share articles, advice and commentary about retail point of sale and security.

Whether you’re a first-time franchise hopeful, a small business owner or an established chain, it’s always smart to stay on top of the latest point of sale best security practices to achieve financial success.

If you are interested in learning more about Sintel’s point of sale systems and how our knowledge and support can impact your future success, call us for a complimentary phone consultation.