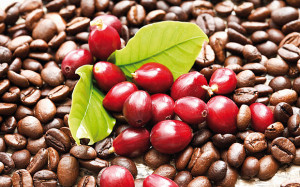 Ancient legends dictate a tale of a young 9th century goat herder who stumbled upon an energizing bean in the beautiful high mountain ranges of Ethiopia. As the story goes, the young man noticed once digested the red berries had a stimulating affect on his flock. Stories of the herder did not appear until 1671 but Ethiopia would become the birthplace of what is known as coffee.

Whether the discovery of the Coffea Arabica plant be a myth or real account, its finding evolved into a universal pleasure.

Starting with the discovery in Ethiopia to the Italian espresso, each culture has contributed to the distinct takes and flavors of coffee.

The muddling of cultures created a unique coffee experience in America.

Chicago’s Eataly, an Italian food restaurant, battles the summer heat with espresso over ice shaken into a frothy mix inside a cocktail shaker. The Italian iced coffee is known as a caffe shakerato and is ordered by one of five patrons.

Other fan favorites at Eataly include cappuccinos blended with milk, ice, and topped with dark chocolate shavings.

Boston’s Ogawa Coffee Shop portrays the delicate art of the Japanese Coffee Culture. The Kyoto-based coffee shop chain has 36 locations with only one being an international store. Customers can choose delicate distinct flavors from Guatemala, Ethiopia, and Brazil.

Ogawa baristas carefully create elaborate designs laid out on the foamy sheath of cappucino drinks. Haruna Murayama, trainer and winner of the 2010 of Ogawa Coffee’s World Latte Art Championship, is known for a tribute to the Japanese willow and cherry blossom trees.  All lattes are carefully designed as homage to Japanese traditions.

Modeled after typical Japanese Cafés, customers can come enjoy a beautifully presented cup of coffee in an amiable environment.The cafe doubles as a teaching space with retractable stadium seating for better view.

Another staple item From Ogawa’s menu is a trio of coffee shots served for comparison of each’s unique tone and character.

Italian Eatery in Cambridge, Mass., dominates the brewing game. Area Four’s front-runner  up is an Italian espresso topped with rich chocolate and cream. Their popular Americano is fashioned to taste like American drip coffee but is brewed to a high concentrate and thinned with steaming water.

Globally we see a lot of similar styles like the Spanish cortado or Australian Flat White. Cortado is Spanish for cut, which is an espresso cut with steamed milk. The Flat White is a layer of silky foamed milk above an espresso concoction.

Most European and Middle Eastern modeled cafes combat the American faced paced environment of coffee shops. You have to wait longer for a cup but operators aim to promote pleasure, relaxation, and discussion. Instead of serving filtered coffee, beverages are made by traditionally boiled methods.

Greek restaurateur, Michael Tzezailidis, uses age-old Hellenic brewing process that is seldom used in Greece today. The earthy undertone of the coffee derives from the sand in which it is brewed in. Briki pots of refined coffee slowly brew on top of hot sand near campfires. At Dark Ave, in New York City, Tzezailidis has custom Greek made basins filled with sand consistent with time-honored procedures. Before consuming the dense liquid customers must wait for the fine particles of coffee to settle.

Turgay Yildizli is bringing New Orleans a touch of Turkish brewing rituals and traditions. Much like Hellenic brewing Turkish coffee is slowly brewed in pots. The act of drinking a cup of coffee in Turkey is a sacred ritual.

Coffee brewing practice  from around the globe have been introduced to the American culture; thus creating a luscious coffee experience.