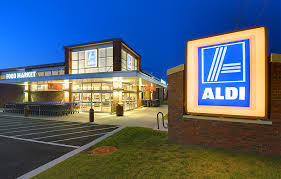 Aldi, a German owned chain of grocery stores is coming to California. By 2016, they plan on opening 45 stores in Southern California.

Aldi is expected to open their first SoCal store as of March and 25 by June 2016.

Introduction of new grocery brands expands consumer choices and companies are fighting to retain a competitive edge.  Haggen Inc. is in the process rebranding 82 supermarkets acquired from Albertsons and Vons. Target and Wal-mart are adjusting their grocery offerings. Google and Amazon are vying for market share through internet platforms. Earlier this year Safeway and Albertsons merged.

Aldi is very distinct from companies like Fresh & Easy, which is roughly the same size. The German chain provides patrons with a clear concept: Good quality at highly discounted prices.

Unlike other grocers, 90% of products sold in Aldi markets are their own private labels. In the long run this is an extremely high pay off. As long shoppers aren’t brand conscious they should benefit from Aldi grocers low prices.

Aldi is short for Albrecht Discount, which is owned by the Albrecht family in Germany.

U.S based operations are headquartered in Batavia, Ill, and is known for pay high wages.

Aldi’s arrival to the Southern California market will create approximately 1,000 jobs in stores and regional headquarters.

Employees working in store will be able to make up to $21 dollars per hour and start around $13 dollars. Regional headquarter and warehouse employees, which will be located in Moreno Valley,  stand to make up to $26 per hour. Their wages begin at $19 per hour.

Aldi supermarkets plans on opening 650 new stores nation wide as part of a five year plan. California is just another market for them to continue expansion.

Sintel Systems is the only direct to user full service for grocery and produce POS. They also provide tailored point of sale systems across the retail industry including, candy shops, cigar shops, and gift shops.