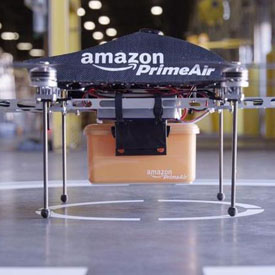 Amazon, which already has many retailers scrambling for the eCommerce sector, is looking to also dominate airspace. Although, CEO Jeff Bezos says they are “years” away from drones becoming as universal as mail trucks new sanctions have put the retailer in a critical position for domination.

Amazon’s biggest impediment is not technology but government regulations here in the U.S. and abroad.

The Federal Aviation Administration granted Amazon to test drones for “research and development.”

The plans for the program were first released a year ago but presents rules limit large commercial use. Current airspace is cut out for enthusiasts and small business. Realtors, for example, can use video drones to capture footage of properties on sale.

Outlined rules prohibit drones to leave the users line of sight and can only fly 100 miles per hour. Drones are also not allowed to drop any objects.

Amazon summarized the plans for Amazon Prime Air at the Nasa UTM (unmanned aerial system traffic management this past March, which carved out airspace for commercial drones.

Prime Air drones would operate in the “high speed transit” area ranging from 200 to 400 feet. Below 200 feet is reserved for “low speed localized traffic” or hobbyist drones. Abovr 400 to 500 feet is the no fly or emergency zone.

Progressive civilian and commercial use of  drones has made it necessary for the FAA to regulate airspace in regards to the capabilities of aircrafts.

The number of commercial, cargo, and military flights operating in U.S. airspace is expected to increase substantially  in the next ten years.

Bezoz noted the United Kingdom has been more accommodating to their plan for speedy delivery. Regulatory agencies in the U.K. have been encouraging of the retailers plans. India has also allowed Amazon to test their delivery program.

Amazons ultimate goal is to deliver purchases within thirty minutes using their “octocopters.”

Google has also been attempting to build a drone delivery program but is facing many of the same hurdles.