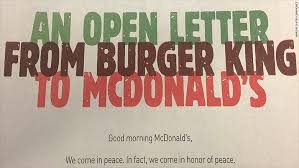 The open letter asked the considerably larger chain for a one day truce, where both companies would combine their staple burgers to create the McWhopper.

“We come in peace. In fact, we come in honor of peace,” stated the letter.

Burger King wanted to end the “burger war” in honor of Peace Day, which takes place on September 21.

A pop-up shop would open in Atlanta, GA, in between Burger King’s Miami headquarters and Mcdonald’s Chicago HQ. Only on September 21, the designated location would have sold the whacky creation with proceeds contributing Peace One Day’s global effort.

Peace One Day is a non-profit organization, which provides educational supplies for thousands of schools in 131 countries worldwide.

“Perhaps you’ll join us in a meaningful global effort,” he continued.

Easterbrook brought up plenty of good points of behalf of Burger Kings proposal. Although it may have come with good intentions, it was also a very awkward surprise.

Whether both companies will work together is unknown. Steve Easterbrook vaguely suggested a partnership.