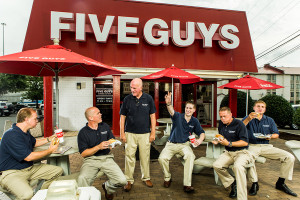 Prior to becoming America’s largest growing chain, Jerry Murrell originally founded Five Guys to keep his sons close to home. What he did not expect was his small burger place becoming the brightest star in the industry.

Born and raised in Michigan, his father was rarely around and credits much of his success to his mother. From an early age any aspiration to work in the restaurant industry were set aside as his mother pushed him to further his education at the University of Michigan.

Having graduated in 1967, he took on a modest career with AXA Equitable and settled for a few years to start a family. These idle years were spent getting married, divorced, and raising his then three sons.

By 1974, Murrel and his sons (Jim, Matt, and Chad) relocated to Northern Virginia where he met Jamie Androsik. They married in 1981 and had their first son, Ben. The last of his five boys had yet to be born.

As his three eldest sons neared the end of their high school careers, Murrell senior presented his sons with the idea of forfeiting their college funds to start a family business. Unlike his own family, which wasn’t very close, Jerry wanted to create something that would keep his family together. Coupled with his sons fears of college they agreed to begin the family venture with less then 70,000 their father had put aside.

Founded in Arlington, Virginia, the first location had little to no parking or even places to sit. Five Guys was literally in the middle of nowhere.

Before the birth of his last son, Tyler, Five Guys referred to his four sons and himself.

His eldest three sons managed everything from cooking to cleaning at the first store, excluding book keeping which his wife managed. Ben was still to young to be helping around the family business.

It was not easy in the beginning. The family not only faced intrafamily arguments but also dealt with issues like stealing employees. Although, minor impediments the restaurant continued to grow.

After receiving good reviews and gaining customer traction, Murrell senior decided to quit his day job and focus his energies solely on his restaurant.

Following his leave, the family began to dream of expansion. They did not expect to be the nations fastest growing chain but wanted to duplicate what they had. Banks refused to provide them with the funding needed to expand so the Murrell’s turned to friends and families for loans. A second location opened in 1989 followed by 3 more in subsequent years.

Janie exclaims scattering the boys across all the stores had positive effects towards family harmony.

Jerry Murrell was insistent on maintaining the exact same menu as they opened more locations. The better burger chain aimed at protecting their “never frozen” ideals. All burgers are handmade and fries hand-cut. Concentrating on refining their present menu, new items were rarely added. For fear of receiving a bad review, Murrell Sr. rarely added new items. He didn’t want to taint the image of his burgers with a bad review on test items. Since, only a hot dog, grilled cheese, and a veggie burger have been added to the menu.

Every Tuesday the family meey at their Lorton headquarters to discuss business. They have soundproofed the conference room to prohibit employees from hearing what often turns into heated arguments. A unanimous decision is still required when having to do with their enterprise.

The next chapter of the Five Guys story began in 2002. After accumulating five location and demand for their burgers evident the sons urged their father to begin franchising. Murrell Sr. feared no one would buy into the concept but after receiving Franchising for Dummies from his son, Matt, he agreed to begin a new venture.

Around the same time Mark Moseley appeared in the picture. The former NFL player previously owned his own burger joint, which he wanted to franchise but was sold by his partner without his consent. Finding interest in the quick service better burger chain, Moseley and the Murrells met with a franchise-development company. Within three days the franchising rights for Virgina were sold and Moseley was hired as head of development.

Jerry’s biggest fear came true. Everyone began having opinions on the menu so the biggest problem they faced was selling their established concept without adjustments.

Five Guys was not the first of better burger concept. Long established chains like west coast’s In-N-Out Burger, founded in 1940, has been dishing out higher quality ingredients. Although, insurgence of similar chains did not take place until the mid-2000. Following Five Guys came restaurant like Smashburger and Shake Shack.

Growth has in part been fueled by valuable press. Followed by media outlets, President Obama stopped at a Five Guys location back in 2009 for a cheeseburger. Well known golfer, Phil Mickelson, also declared his love for the burger chain during a press meeting. His investment in the franchise was not disclosed until a week after the announcement.

To franchise,  a down payment of 20,000 is required and accompanied by a 75,000 fee per store. Usually a single franchisor will own 10-15 locations, costing between $350,000 to half a million to open. Annual revenues equate to approximately 1.2 million, six percent of which is collected by Five Guys. Murrell also collects 1.5% that is reimbursed to employees. Stores that score high in cleanliness, safety, and service are rewarded 1,000 weekly.

Tom Horton is one of the largest investor. With a total of 75 stores and the rights to 275, he claims becoming a franchisee was one of his best investments.

With franchising comes difficulties. Others opinions and sentiments need to be taken into consideration. Franchisees often request adding certain items to the menu but the Murrells want to keep their menu simple. Noting Boston Market, Murrells says bulging menus lead to straying from core values.

Five guys has had to sue franchisees for closing restaurant without notice. Often times they  push smaller franchisees to sell to more assertive franchise owners. The franchise agreements allows franchisees little breathing room. Even Murrell would most likely not sign it. Final decisions still require the families approval.

Expanding rapidly as the recession of 2008 took its toll, Five Guys hit some major roadblocks. Funding needed to continue development decreased dramatically and they were left with open ended leases/contracts. Franchisees were the least of their worries so they ceded demands to allow growth.

Many proposals were offered to buy out the Murrells but they listened and politely declined. For the time being they wish to maintain Five Guys within the family. All seven member own an equal share of 75% of the company, while Miller Investments and friends own the last 25%.

By the end of the recession Five Guys established vital credibility. Cheap real estate led to worthier locations. Top executives from other chains and better employees joined the team. Now Five Guys has a 100 million credit line with GE and over 6,000 corporate employees.

Each son has settles into respective positions in the company. The eldest helps Murrell Sr. manage the whole company. Matt is head of development for new sites. Chad trains manager. The last two oversee IT and bakeries that supply the burger buns. In total company owned stores amount to 200 locations. When ever the opportunity arises to buy back a location, Murrell does it.

Rapid growth will lead to problems in future years. Not only is there increase competition from other quality quick service burger chains. Close proximity of Five guys locations has and will cause competition among themselves.

A contract with Freston Road Investments has been closed, which will open  200-300 stores in Great Britian.

Murrell has no plans of stepping down from his position anytime soon.