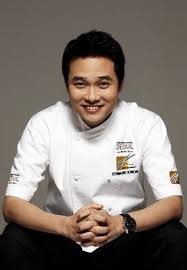 Celebrity chef, Edward Kwon, has made it his mission to champion the spread of traditional Korean dishes.

Gaining much success from managing some of the most prestigious kitchens in the world, Kwon has flourished as a chef. Adapting his skills to a business setting carved a different path in his career. Presently Kwon, added on to the long list of luxury restaurants, boasts multiple released books, his own cooking show, and EK Food company.

Kwon has worked in notorious hotels from Korea to the states and United Arab Emirates. He even took to founding two of his very own notable restaurants in Moscow and Seoul.

By what some may call fate, Edward Kwon fell into the culinary world with no intentions of staying. In need of means for self support, he began working as a dishwater then move to a server at a restaurant. A fellow coworker later informed him kitchen staff made higher wages and only then did he move into the culinary world.

Kwon has learned to deeply appreciate his travels; although, abroad and at home he faced many impediments. Without speaking a hint of English, he was thrown into the competitive environment of kitchens abroad. Often times he also had to deal with racial slander. Upon returning home he noticed how differently people treated him because of his time overseas, as if he had an unfair advantage. Kwon denounces all suggestions of being less Korean for his time away.

Kwon’s was educated as a hotel chef primarily in French Cuisine. His restaurant is Seoul is centered on a French dining experience.

Away from home Kwon’s remaining goal is the spread of “hansik,” Korean food. Both Elements by Edward Kwon and his new restaurant in St. Petersburg focus on Korean dishes.

Korean music and movies have gained traction but Kwon notes these may just be trends “but the memory of food lasts.”

He hopes to act as a liaison for Korean food and the world. Most people opt for Korean BBQ if given the option but don’t really know any other traditional meals. Kwon resolve to Seoul’s attempt to spread Korean culture globally should be lead by food.

Despite his modern twist to his dishes and unconventional setting, Kwon sticks true to time-honored Korean ingredients and flavors.

Kwon abides by the principal that “You can put a twist on Korean Food. But A Korean should be able to eat it and say, ‘Yes, this is Korean food.’ ”