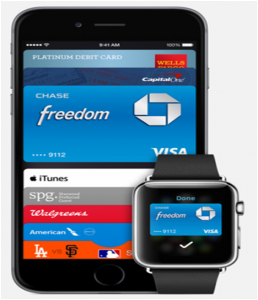 Although still rare, mobile payments — the use of phones to make in-store payments — are gaining plenty of attention, and many industry observers are seeing technical developments almost certain to reshape the payments landscape.

Writing for TheFinancialBrand.com, Jim Marous provides a terrific summary of the initiatives by Apple Pay, CurrentC, Softcard and other mobile payment providers’ efforts to bring mobile point of sale payments into the mainstream.

As the only full-service point of sale provider — from software development to franchise incubator to ongoing support — part of Sintel’s commitment to our customers and industry is to share ideas and information. Whether you’re a first-time franchise hopeful, a small business owner or an established chain, it’s always smart to stay on top of the latest mobile point of sale technologies to achieve financial success.

Here are the highlights of the Marous’ post, “When Will POS Mobile Payments Go Mainstream?” which he starts off by listing a number of recent developments from vendors.

– iPhone 6 and iPhone 6 Plus users can make mobile payments at over 200,000 retail locations in the U.S.

– Marous believes that one of the major advantages to Apple Pay is that it includes new security features that speak directly to consumers’ top mobile payments concerns.

– Because of Apple’s devoted fan base and the company’s unique ability to change consumer behavior on a large scale, Apple Pay is thought by many to signal a tipping point for mobile near field communication (NFC) acceptance by financial organizations, merchants and consumers.

– MCX has created a consortium of over 70 of the largest retailers in the U.S., including Target and Wal-Mart, and announced an alternative mobile wallet solution, CurrentC.

– The participating merchants control one in five retail dollars spent in US stores, and have said they won’t accept Apple Pay.

– While significantly smaller than either Apple Pay or CurrentC, the SoftCard mobile wallet app is backed by three of the largest U.S. wireless carriers.

– Originally called ISIS, it changed its name to SoftCard after a violent military group of the same name began to dominate headlines.

– There exists alternative apps by allowing users to make in-store purchases entirely within their phone as a software-only process, bypassing payment terminals altogether.

For Marous, the question that needs to be asked is whether these developments are enough to be the catalyst for people to finally start paying with their phones? He notes that, according to a report from BI Intelligence, although mobile payment volume will grow rapidly over the next five years, it will still only represent less than 5% of in-store retail sales in 2018.

More than one definition exists for what constitutes “mobile payments.” Consider the following list, which Marous says presents a challenge to describing the mobile payments “explosion”:

Mobile Wallet
– Possibly the most hyped form of mobile payment, Marous says this method uses “tap and go” or a smartphone’s built-in NFC wireless technology at the point of sale terminal.

– This in-store payment is the area where Apple Pay, Softcard (previously known as ISIS) and CurrentC (MCX) are competing.

– The Digital Wallet form of payment lets consumers make payments to merchants or to other people (P2P) using a mobile device without direct contact with a point of sale terminal.

– The online transactions are done on a phone with a credit or debit card entered for payment but could also include email, SMS or even social-based payments.

– Merchant-based mobile payments are usually associated with card reading devices from Square, PayPay and others.

– Starbucks, TabbedOut, OpenTable, and a number of merchants are building payment functionality into their mobile apps. Marous believes that, when done right, closed loop mobile simplifies the payment process for frequent customers.

• “With any and all combinations of the above options, in addition to mobile bill payments, being used by government and trade organizations to measure ‘mobile payments’, no wonder there is confusion on growth estimates,” Marous writes. “For most industry watchers, the most important measure of mobile payment acceptance is the growth of in-store mobile wallet payments.”

• To Marous, in a case of the “law of small numbers,” the growth rate of point of sale mobile payments is expected to explode at a five-year compound annual growth rate of 154%, to $189 billion in 2018. “While seemingly impressive, in-store mobile payments will still only account for less than 4% of brick-and-mortar transaction value according to BI Intelligence,” he writes.

• A 2013 Harris Interactive report states that, while awareness of the ability to make mobile POS payments is relatively high, just 6% of US adults said they had made a payment in a store with their smartphone by tapping it at a payment terminal. BI Intelligence believes that over the past year, that number has most likely grown to about 8%, following the existing growth trend.

• Marous also considers a number of reasons mobile payments have not been widely adopted in the United States:

– Supply side barriers, for example the difficulty of getting industry participants to agree on technological standards and the lack of compelling business models for participants.

– Demand side barriers, including the lack of a well-defined value proposition or the continued concern around privacy and security. “Many believe Apply Pay may have addressed some of the convenience and security concerns,” Marous writes. “Future growth is expected to be positively impacted by the introduction of Apple Pay, since going forward, 90 percent of future smartphone shipments will be able to make NFC payments.”

• “Not surprisingly,” Marous writes, “the primary demographic group that is leading the charge to greater in-store purchasing acceptance are the millennials.”

– Fifty-five percent of people who say they use mobile wallets are millennials (ages 18 to 34).

– Mobile natives in the millennial and other demographic groups are expected to continue to drive mobile wallet adoption.

– Marous notes that, from a mobile platform perspective, Android users outpace iPhone users in making proximity payments, which most likely reflects both the demographic make-up of the platforms as well as the fact that most Android phones now have integrated NFC capabilities.

• “With the 2015 EMV migration deadline set by the card networks and with new Apple phones having NFC compatibility, most merchants will be upgrading to NFC-compatible terminals in the next 12-18 months,” Marous writes. “So, instead of consumers having to search out NFC compatible terminals (or merchants disengaging the functionality), consumers will have more places to make in-store mobile payments.”

• “The introduction of new mobile payment alternatives that address consumer concerns is exciting and will lead to growth in the percentage of payments made by a smartphone on premises,” Marous writes. “Once the POS mobile payment value proposition is increased and more consumers accept this new form of payment, all organizations will need to provide this functionality.” Marous closes his post by writing, “Until then, financial institutions should continue to closely monitor mobile payment trends and be ready to react quickly when customer and member demand reaches each organization’s respective tipping point.”

For more insights into mobile point of sale technologies, check out our related posts, Mobile POS Technology Seeks USPO’s Stamp of Approval, Near Field Communications And Tokenization Behind Apple’s Point of Sale Play, and MasterCard Mandates Contactless Payments At Point Of Sale.

Just as we share our vast point of sale experience and expertise with startup owners in order to help them make the best decisions from the very beginning, we at Sintel Systems are happy to share articles, advice and commentary about retail point of sale and security.

Whether you’re a first-time franchise hopeful, a small business owner or an established chain, it’s imperative to stay on top of the latest point of sale best security practices to achieve financial success.

If you are interested in learning more about Sintel’s point of sale (POS) systems and how our knowledge and support can impact your future success, call us for a complimentary phone consultation.
Sintel Systems is the only direct to end user full-service provider of tailored Point of Sale systems across retail, restaurant and service industries, including frozen yogurt shops, pizzerias, sushi restaurants, cafés and retail stores.