Skip to content
Home » Blog » Uncategorized » Move Over Froyo, Ice Cream is back!

The west coast has long since been the battleground for ice cream and frozen yogurt shops vying for consumer’s choice. Since 2008 numerous frozen yogurt chains opened causing an average of 21% increase on yearly sales, according to market research. We saw the emergence of notable chains like Menchies, Yogurtland, Pinkberry, and Tutti Frutti; all of which began in California.

Consumer’s preference shift was obvious when my own local Baskin Robins was replaced by Yogurtland.

As of late there has been a resurgence of ice cream chains establishing a foothold on the frozen dessert market. Ice cream shop concepts range from your average scoop and cone creamery to parlors stirring up fresh made ice cream using liquid nitrogen.

These five chains are setting the stage for ice cream’s comeback: 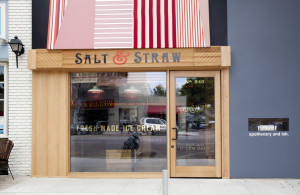 Known  for their uncommon flavors including black olive brittle and goat cheese, avocado and strawberry sorbet, and garam masala and cinnamon cauliflower, the Portland, Oregon based parlor brought its unique flavors to Los Angeles in 2014. The company already has four locations, three of which are located in Portland.

Two more locations are expected to open in Los Angeles by the end of 2016. The chain does not plan to franchise and growth will continue “opportunistically.”

The menu changes monthly and menu items vary depending on location. The only permanent fixture at all locations is a sea salt ice cream with caramel ribbon. Caramel is hand-poured once the treat has been mixed into a velvety cream.

Sloan’s is actually an east coast chain but recently opened its first west coast location in San Diego, California. The chain began franchising in 2012 and now has six units in Palm Beach County, Florida, and the new California location.

A key point in their success will not be having better ice cream than their competitors but “[putting]  a lot of emphasis on the experience of coming to the store.”

Sloan is looking to expand into major markets like Texas and New York. 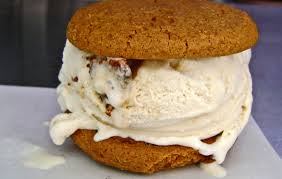 Cream, which stands for Cookies Rule Everything Around Me, is a build-your-own ice cream sandwich concept based in San Francisco, California. The  franchise brand recently opened its 20th location and continues to rapidly expand.

Patrons start by picking a cookie and ice cream, followed by choice of toppings. Cookies are freshly baked in house and each location offers around 15 different options including vegan/gluten free cookies. Cream also provided vegan ice cream for customers with diverse dietary needs. If you decide you don’t want an ice cream sandwich, Cream has your regular cones, sundaes, milkshakes, and even The Cream Taco on its menu. Cookie sandwiches are priced at $2.99.

A recent deal with a franchise operator in Florida is set to open 30 locations over the nest seven years. They expect sixty locations will be opened by the end of 2016.

Cream has also partnered with mobile app provider Pepper to allow customers to order, pay ahead, and accumulate loyalty points. 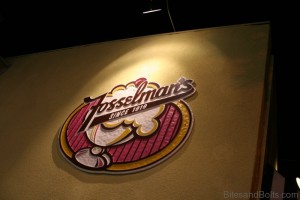 Fosselman’s is well-known throughout Southern California. Based in Alhambra, Fosselman’s was founded in 1919 and has since been shelling out hard-packed ice cream.

Unlike the other ice cream shops featured in this article, Fosselman’s is primarily a wholesale business.

A recent collaboration with fast-casual chain, Dog Haus, is bringing Fosselman’s to their menu. Dog Haus recently added soft-serve ice cream fostered by the ice cream makers. Ice cream will also be added to a new line of milk shakes.

John Fosselman is an old time friend of Hagop Giragossian who happens to be a partner in dog haus. Ice Cream compliments dishes served at the hot dog chain so partnering was valuable for both parties.

Dog Haus is expanding rapidly with 110 locations scheduled for development in Texas, Arizona, Utah, and Nevada. Nine locations are currently open in California and one in Colorado. All restaurants will include Fosselman’s Ice Cream on their menus. 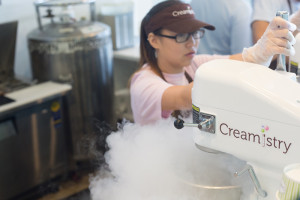 Creamistry by far is my favorite up-and-coming frozen yogurt chain. Founder Jay Yim saw a similar concept on a trip to Korea and decided to bring it to the states.

Customers choose choose a base (milk, orgaanic milk, non-dairy/water based sorbet, or coconut milk), flavors, and toppings than a creamologists make the frozen-to-order ice cream. Liquid nitrogen is poured directly into the mixing bowl and disperses in second leaving the creamy product.

The first Creamistry and only company owned location opened in Irvine, California roughly two years ago. Now the chain boasts seven location in Southern California with the eight or nine anticipated to be opened by the end of 2015. Franchise deals for locations in Dubia, Northern California, Nevada, Arizona, Florida, and Texas are also in the works.

Sintel Systems is the only full-service provider of tailored Point of Sale systems acrossrestaurant and service industries, including frozen yogurt shops, pizzerias, andcafés.