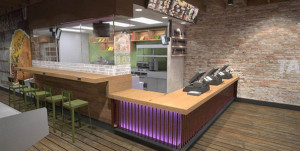 Taco bell has announced new urban Wicker Park location in Chicago will open on September 22. The San Francisco location opening is unclear but it is also expected to begin operations later this month.

Dubbed Taco Bell Cantinas, urban locations are meant to engage millennials who live in inner-city areas. The Cantina name will only be used for urban units.

Both locations will serve beer and wine but the Wicker Park menu will also include Twisted Freezes made with rum, tequila, and vodka.

Beer and wine will cost around $4, while Twisted Freezes will range from $6.19 to $7.19 depending on choice of liquor.

Food will be served in baskets unlike normal quick service restaurant cardboard packaging.

Most quick service restaurant center around stand alone locations with drive thru capabilities and historically Taco Bell modeled restaurants after this fashion. So when customers requested “urbanization,” the fast food restaurant chain decided to provide restaurant where millennials mostly reside and can easily be accessed by foot.

The San Francisco location, which is near AT&T Park features various large digital screens where patrons can watch sport games.

Taco Bell also announced it modeled Cantina locations to adhere customers demand for transparency. Consumers are more interested in what they are digesting and how it is made compared to other time periods.  Cantina kitchens will be exposed for clientele to view the preparation process.