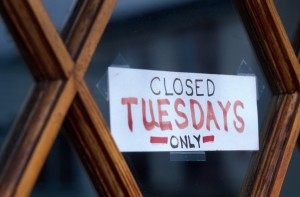 When does a restaurant really close? In a classic case of “we said, they said,” a San Francisco quick-serve restaurateur contacted Inside Scoop at SFGate with a conundrum about how to handle late-arriving diners and perceptions of “closing time.”

After an incident where diners arrived three minutes before official closing time and then ignored all the classic “we’re closing now” signs (e.g., turning down the music, flipping the “open” sign, bringing in the outdoor furniture), eventually leading to singed feathers and a Yelp! Screed, this anonymous owner reached out for advice on how to handle similar situations in the future. To quote:

“His Yelp review suggested a solution that I kind of agree with, but we have found that it backfires more often than not. He suggested that when taking their order at the counter that we mention that we are closing shortly and they can stay until a certain time. In our experience customers bristle at conversations like this and would much rather just go though the non-conversational dance of trying to get away with as much as possible, but also taking cues from the staff and knowing when its time to move along.”

SFGate’s Michael Bauer’s thoughtful response on “protocol for guests who walk in 2 minutes before closing time”: “To me it would have been best if the counter person would have said something like this: ‘We close at 8:30, but it will take us an hour to clean up. Is that enough time for you to enjoy your meal?’ That approach shouldn’t offend anyone — after all this is a quick-serve restaurant and I don’t suspect many diners linger for more than an hour anyway. If this offends anyone, it probably won’t be any worse than what actually happened.”

As a single source for business solutions, our experienced, knowledgeable team negotiates the complex POS landscape to enable you to find the right POS system for your business and budget.  Hardware – Software – Support