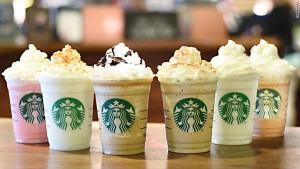 Earlier this year limited edition birthday cake frapps was available, just one of many quirky flavors released over its lifespan.

All six new flavors correspond  with the dessert theme. Customers creations over the years inspired these sweet treats and are said to remain a permanent menu fixture.

Staring June 19, customers will be able to vote their favorite flavor. The winner will be offered on a discount July 3-6. Specials range per store but the fan favorite drink will be around three dollars for a grande. Suggested price for the other five anniversary drinks is $4.75.

District manger, Dina Campion, noticed other coffee shops in the San Fernando Valley, California selling blended drinks. Tests proved to be a huge success and by 1995 the Starbucks Frappuccino was being sold nationwide.

Including the six new flavors there is a total of 34 flavors. Special anniversary frappuccinos go as follows:

470 calories in a Grande

510 calories in a Grande

430 calories in a Grande

420 calories in a grande

350 calories in a Grande

480 Calories in a Grande