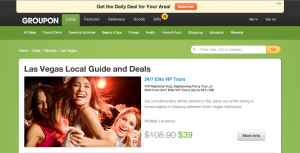 A long slide in the fortunes at deal-a-day pioneer Groupon, including a significant drop in fourth-quarter earnings and 24% reduction in the company’s value, resulted in the ouster of CEO Andrew Mason late last week.

In his already infamous exit memo, Mason, who allegedly turned down a $6 billion offer from Google in 2010, said, “You are doing amazing things at Groupon, and you deserve the outside world to give you a second chance. I’m getting in the way of that. A fresh CEO earns you that chance.”

Launched in Chicago in 2008, Groupon was the most talked-about tech debut between Google and Facebook, with optimists expecting it to replace local advertising.

Five years hence, a marketplace correction has analysts wondering if daily deals are (were?) too good to be true. What seemed like an easy out from the effort and intricacies of marketing a business to new audiences lost much of its luster as:  competition heated up in the category; coupon fatigue set in amongst consumers; and many merchants publicly panned the financial hardships generated by their “deals.”

Hundreds of copycats of Groupon’s easy-to-emulate model sprang up (several which have already shuttered). CNN reported that “LivingSocial laid off 400 workers in November, 2012, not long after Amazon reported it had lost $169 million due to investing in the company.”

In “Why the online ‘daily deals’ craze fizzled,” CNN blamed spam, irrelevance, angry businesses and deal fatigue, saying, “While 2010 and 2011 brought us stories of daily-deal addiction, 2012 and 2013 have brought more about daily-deal burnout.”

In The Tyranny of Groupon, The Washington Post was among many citing the dilution of quality in the deals, which began as exclusive-seeming enticements with a narrow window of availability, but now list hundreds, even thousands, of deals with come-ons like “Why Have You Not Yet Paid Someone to Cover Your Body in Sugar?” and “Your Colon Has Not Been Attended To in Far Too Long.”

“Beware: A Groupon Campaign Could Slash Your Yelp Rating,” announced Forbes on March 2, 2013. “The first and most obvious problem here is that a drop in the Yelp rating could lead to more of a loss in business than the Groupon campaign brings in.”

As the New York Times reported, coupon sites are a great deal, but not always to merchants. “The consumers were being told: You will never pay full price again. The merchants were hearing: You are going to get new customers who will stick around and pay full price. Disappointment was inevitable.”

One owner of fast-food outlets categorized his deal-a-day consumers thusly: “There are customers who are awesome: They redeem their voucher and spend a little extra beyond it. There are customers who spend just the amount of the voucher or a few cents over. Then there are those who say: ‘I’d like this, but I’m not at $10 so can you pay me back the difference?'”

As for chef-driven restaurants, “…when you’ve trained [consumers] to think about you at a discount price … how do you get them back to thinking of you as a premium product after that?” Grubstreet quoted restaurant marketing expert Ellen Malloy. “It’s easy to see why restaurants went for Groupon, because there was a keen insight into the small-business mindset — instead of charging you a fee or 15 percent up front for marketing like a traditional agency, Groupon only made money if they delivered the traffic. The problem for small business was, then their cut on the backend basically ate any profits. So it wasn’t a sustainable business model for either side.”

“Groupon was white-hot because it was novel, huge, and offered restaurants an easy way out,” Malloy said. “You don’t have to think to do a Groupon, just sign up and gird your loins. With marketing, you have to think a little, you have to work a little. But here’s the thing — in comparison to other industries, restaurants have it easy. Think about it: If you’re a band, you probably have one new album each year. If you are a retail store, you get product in once a season. For restaurants, there’s something new nearly every day — a new dish, a new cocktail, a new wine, a killer pairing a server discovered — leveraging all of that is what marketing is about.”

As for Mason, some blame the business model, not the CEO. Seeking Alpha said, “Groupon fails because the small businesses offering the discounts end up losing money. Not only will a business have to offer a steep discount for a product or service, but will also have to pay a high commission structure to Groupon, just for listing the deal.”

“The theory behind small businesses doing this is even though they would lose money on the coupons, they believe they can attract long-term customers. Unfortunately, this theory is wrong. The businesses find customer volume falls off after the deals are done and they are not much better off than before they offered the coupon.”

Mr. Mason, who dodged a potential dismissal in November, will be temporarily replaced by Eric Lefkofsky, Groupon’s executive chairman, and Theodore J. Leonsis, its vice chairman, while they search for a replacement.

Lefkofky was quoted in Crain’s Chicago Business as saying the company is “inches away from greatness. The long-term horizon of the company is fantastic,” Lefkofsky said. Crain’s, however, noted pragmatically, “A new CEO isn’t going to make the company’s problems magically disappear.”

While Groupon has been moving away from direct-email and toward a marketplace model, in which people purchase items through browsing Groupon’s site rather than through an email prompt, Chicago Business Journal acknowledged, “Groupon’s business model will challenge next CEO.”

Crain’s reported elsewhere, “Groupon’s toughest sell yet: CEO post.” And Forbes said just before Mason’s firing, “The daily deals category as we knew it is dead.”

So what next? See Part 2 of this blog to find out.

As a single source for business solutions, our experienced, knowledgable team negotiates the complex POS landscape for you to enable you to find the right POS system for your business and budget.  Hardware – Software – Support