Ordering at fast food restaurants (or QSR) or other businesses with POS Kiosk technology has become the newest and most appealing thing that the food and drink industry has yet to introduce to its customers.

The advantages of Point of Sale Kiosk technology have also become increasingly clear. Kiosks allow for businesses to cut down on labor costs, boost efficiency, reduce order errors, increase overall customer satisfaction, and are so visually captivating that they help attract more customers.

We have only to look over at Japan who has already incorporated unattended ordering and checkout at such a level that this type of ordering system has become the norm. A shift towards POS kiosk technology has too started across the US, a business ordering revolution is thus underway.

Kiosks have already attracted fast food franchises and businesses like McDonalds, Chick-fil-a, Wendy’s, and Panera, but they have also begun to catch the attention of small business chains, single restaurants, convenience stores, and even food trucks.

This is the case for Bob Stephens who owns and runs a pizza food truck called Luv Pizzas. Stephens has adopted a custom automated POS kiosk after noticing the new kiosks installed at his local McDonalds and supermarket. He also noticed these interactive POS kiosks were very effective in cutting down lines, they allowed for customers to order faster, and so he thought his food business might really benefit from this new technology.

Stephen went through with his idea of integrating kiosk POS technology into his food truck and he says that so far so good and that he is pleased with the results this new ordering system technology is bringing to his business.

The Buffalo News article “The rise of the machine: Stores and restaurants turn to self-service kiosks” by Samantha Christmann, reemphasizes that kiosks “touch on every prominent preference of the millennial shopper. They prefer the sense of control technology gives them, allowing them to customize and place their own orders at their own pace without the risk of outside human error. They want a simplified payment process. And they want more personalized customer experience,” which they’ll all get with most POS kiosk technology.

So with the increasing number of restaurants and businesses, no matter big or small, looking to invest in kiosk new ordering technology, it makes sense to look to Sintel Systems, a Point of Sales technology company, who offers the newest in self-service kiosks and online ordering POS systems to a wide array of businesses.

Sintel Systems has actually just recently released their new-generation POS kiosk system. Their kiosk system’s newest and most notable feature is its built in EMV reader. Before, Sintel System’s kiosks use to have the EMV right outside, front and center, but now the reader is placed right inside for a sleeker look. Sintel System’s new kiosk also includes a built in printer and a 2D scanner. 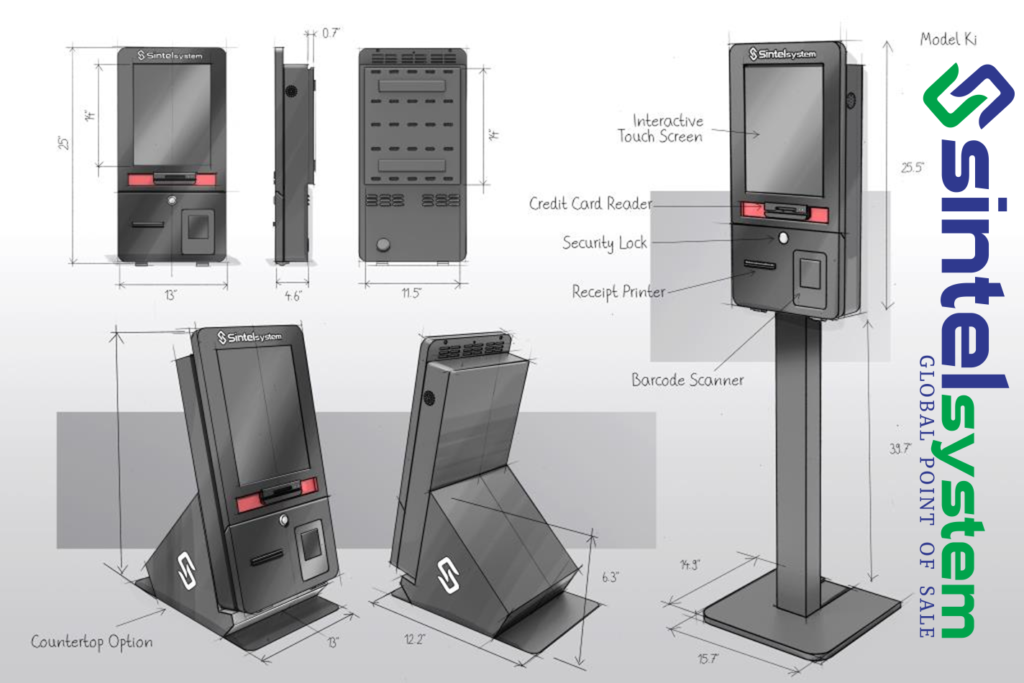