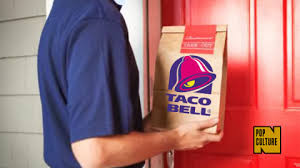 Taco Bell announced Wednesday it will be partnering with a delivery-service start up to bring their burritos and Crunchwraps right to your front steps.

DoorDash, which started in Palo Alto in 2012, will deliver daytime orders to 90 cities in California and Texas.

Customers in 200 cities, including Los Angeles, San Francisco, Orange County, and Dallas, can create custom orders via DoorDash’s app or website. The delivery-service will than place, pick up, and delivery your order. Customers will be notified through the app when the driver is nearing its destination.

There is no minimum order but a flat rate fee of $3.99 will be added with encouragements to tip the driver.

In ensuing days Taco Bell will promote delivery on Periscope, Twitter, and Snapchat.

Taco Bell CEO, Brain Niccol said, “knowing that delivery is the no. 1 request from our customers , we see a tremendous opportunity to bring the Taco Bell experience to fans where and when they want it most.”

Last month, the Mexican quick service chain announced their new urban prototype would be serving drink with a kick. The drink menu will include beer, wine, and “mixed alcohol Taco Bell freezes.”

Burger King began testing back in 2012. McDonald’s began experimenting earlier this year in New York city with the Postmates app.

Starbucks plans on testing delivery in New York city with Green Apron and Seattle with Postmates during the second half of 2015.

Quick Service Restaurants are looking to excel in delivering when and where you want it.

Sintel Systems is the only full-service provider of tailored Point of Sale systems acrossrestaurant and service industries, including frozen yogurt shops, pizzerias, and cafés.